Our Partners and Associates

Learn more about the members of the Australian Seed Bank Partnership

The Partnership consists of at least one conservation seed bank from each state and territory, allowing for national collaboration and country-wide, strategic delivery on shared priorities. With the inclusion of Greening Australia, the Australian Network for Plant Conservation and the Millennium Seed Bank Partnership, we have strong ties with Australian plant and restoration networks and international facilities that provide invaluable support to conserve our plants.

Some partners have resources on their websites for seed and germination collections which have been linked to in the bios below. A national data set of seed collections is also available on the Australian Seed Bank online. 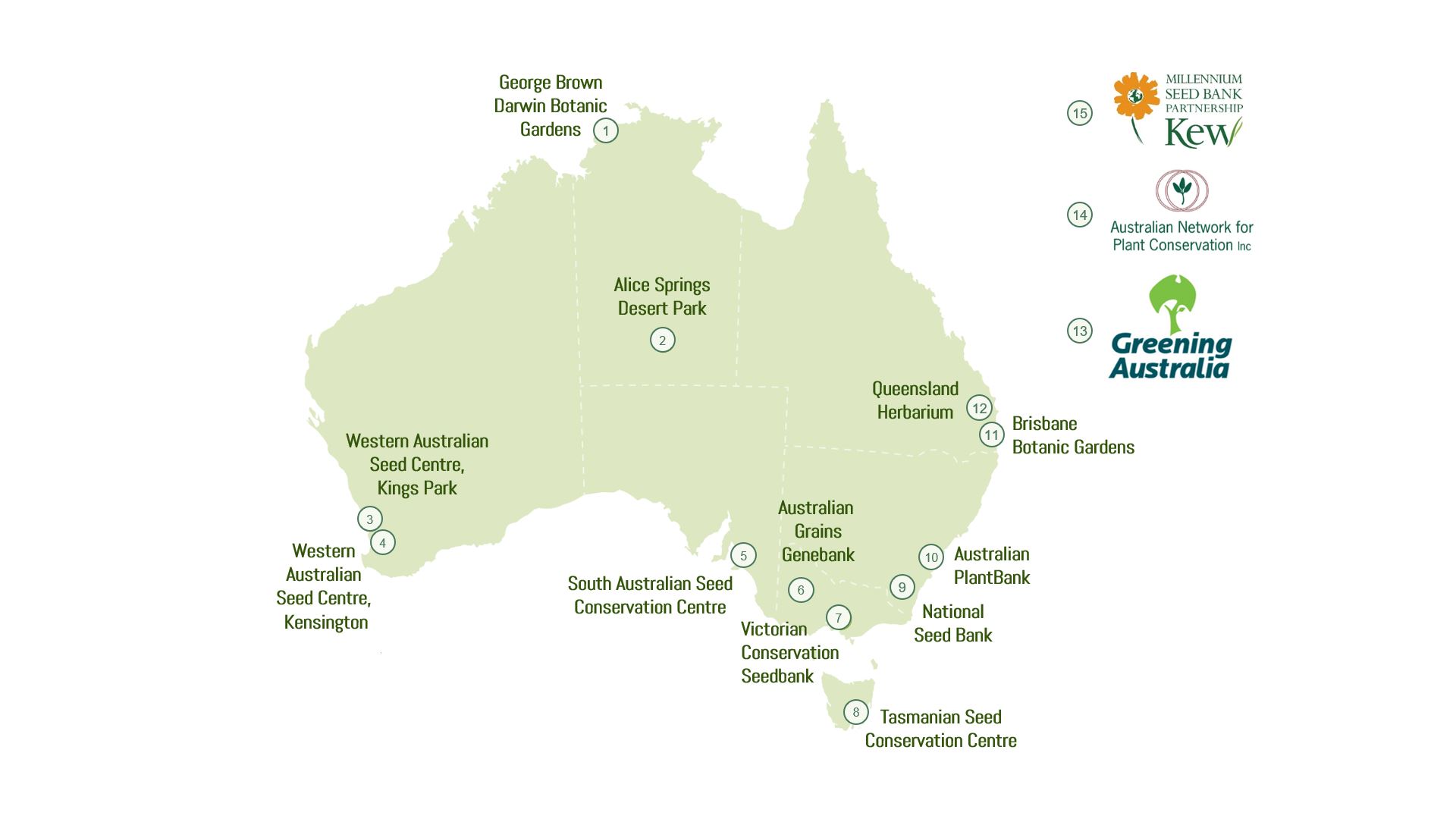 The George Brown Darwin Botanic Gardens is located 2km from the Darwin CBD. The gardens contain vibrant displays of native plants from northern Australia as well as other exotic tropical plants from around the world. The various plantings throughout the gardens present a rich tapestry of tropical orchids, heliconias, bromeliads and gingers. With the recent addition of a new Visitor and Event Centre, visitors have the opportunity to learn about the Gardens natural and cultural history as well as the diverse plant collections and the many uses Aboriginal people have for Australia’s native tropical plants.

With the loss of habitat, ecosystems, species and the changing of climate, the Alice Springs Desert Park is positioned to empower and connect people with nature, the natural world and the environment. The Desert Park plays a role in desert research and conservation, and is closely connected to the local Arrernte people and embraces parts of the Akngwelye and Yeperenye Altyerre (Wild Dog and Caterpillar) dreaming stories. The stories and history of the Arrernte people, together with the plants and animals they are responsible for, are told through the interpretation and creation of three distinct desert habitats – Desert Rivers, Sand Country and Woodland. These habitats allow visitors to experience desert life as it really is.

The WA Seed Centre, Kings Park is located in the Biodiversity Conservation Centre in Kings Park and Botanic Garden and has been involved in the collection, storage and propagation of Western Australian native plant seeds since the early 1960’s. Programs of the WA Seed Centre, Kings Park focus on collecting seed and plant material for conservation, ecological restoration, plant breeding, and research, as well as supporting the displays of WA’s plant species in the Western Australian Botanic Garden. Seed and plant material is collected from locations throughout Western Australia including the Kimberley over 3,000 km to the north of Perth, the Great Victoria Desert in the east, and Esperance and Cape Arid in the south-east. Seeds from over 3,500 different plant species are now stored in the seed bank.

Co-located with the Western Australian Herbarium, the WA Seed Centre, Kensington is the principal seed banking facility for Western Australia’s rare, threatened and poorly known plant species. The centre aims to store sufficient genetic resources from each species collected under conditions which aim to maintain the highest possible seed viability. The collections are stored to enable seed-based recovery actions such as translocation to be undertaken when and if required. The centre also maintains an integrated database containing seed provenance and seed biology data for each plant species collected. The centre currently houses over 4,000 collections of conservation significant plant species.

Established in 2002, the South Australian Seed Conservation Centre helps to protect the state’s threatened plant species from extinction, while supporting the restoration of habitats around South Australia. Throughout the Centre’s program, wild provenance seeds have been collected from regions across the state and safeguarded in long term storage at sub-zero temperatures. Approximately half the species in the state (about 2,000) and nearly 70 per cent of the state’s threatened species are currently stored in the seed bank, forming part of the living collections at the Adelaide Botanic Garden.

The Australian Grains Genebank (AGG) is a national centre for storing genetic material for plant breeding and research. The AGG aims to collect and conserve the seeds of Australian crop wild relative species that are not yet adequately represented in existing collections. A crop wild relative is a wild plant closely related to a domesticated plant. These plants constitute an increasingly important resource for improving agricultural production and for maintaining sustainable agro-ecosystems. Their natural selection in the wild may enable them to accumulate a rich set of useful traits that can be introduced into crop plants by crossing.

The Victorian Conservation Seedbank is Victoria’s primary facility for the conservation of the state’s most threatened plants. It stores the seeds and spores of native Victorian plants, particularly endemics and at-risk species, forming the basis for our research into effective long-term germplasm storage, germination characteristics, and the propagation of recalcitrant native species. The centre, supported by our associated laboratories and plant propagation nurseries, forms part of Royal Botanic Gardens Victoria’s Bushfire Plant Recovery and Care Unit, which aims to support the restoration of fire damaged landscapes and ecosystems.

The Tasmanian Seed Conservation Centre is a seed bank facility based at the Royal Tasmanian Botanical Gardens. It was opened in 2005 as part of the international Millennium Seed Bank Project. The seed bank is focused on the native flora of Tasmania, with a particular emphasis on Tasmania’s Rare and Threatened plants. A small number of introduced weeds and garden exotics are also held. The seed bank currently has one full time member of staff and a number of volunteers who assist in the collecting, processing and curation of the seed collections. Collecting priorities for the seed bank are informed and assisted by staff of the Environment, Heritage and Land Division of the Department of Natural Resources and Environment, Tasmania. Collection verification is handled by the staff of the Tasmanian Herbarium.

The Australian PlantBank was built in NSW in 2013. It is an international centre for plant research and learning, incorporating the largest native plant conservation seedbank in Australia. Like the National Herbarium of NSW, the Australian PlantBank forms a living reference collection for identification, research and restoration. Visitors can immerse themselves in the workings of our scientists by seeing into the laboratories aided by award-winning interpretation. As well as storing millions of seeds, PlantBank staff contribute to the conservation, research and restoration of threatened species and plant communities through our partnerships in Australia and overseas.

12. The Queensland Herbarium, Queensland Department of Environment and Science

The Queensland Herbarium is the centre for science, research and information on Queensland’s ecosystems and species of plants, fungi, algae and animals. Co-located with the Brisbane Botanic Gardens, Mt Coot-tha, this facility holds the state’s plant specimen collection of more than 850,000 specimens, representing 150 years of species discovery. Botanists and members of the public continue to contribute thousands of specimens to the Herbarium collection each year, identifying new species and adding new distribution records. The Herbarium’s research provides the essential information needed for the conservation assessment and management of Queensland’s species and ecosystems and helps us to better understand ecological processes and the services provided by ecosystems and wildlife.

Greening Australia is a national, not-for-profit committed to restoring Australia’s diverse landscapes and protecting biodiversity in ways that benefit communities, economies, and nature. With projects spanning the breadth of the country – from city suburbs to remote rural locations – GA apply a science-led, collaborative approach to deliver nature-based solutions addressing the twin crises of climate change and biodiversity loss. Greening Australia was established in 1982, in response to the serious impacts of tree decline on agriculture and the environment across Australia. Today, they remain dedicated to solving complex environmental problems through on-ground restoration at scale. By restoring Australia’s diverse and iconic ecosystems, GA help create healthy, productive landscapes where people and nature can thrive.

The Australian Network for Plant Conservation Inc. is an association of people and organisations dedicated to the conservation of Australia’s native plant species and vegetation communities. The ANPC is the national network that links people, research and action in plant conservation with the overarching goal to “promote and develop plant conservation in Australia”. They work to facilitate linkage and information flow across boundaries; provide a knowledge network with long-term continuity; disseminate scientific knowledge and practical skills and insights; and encourage dialogue and contact across the conservation sector.

Kew’s global seed banking network, the Millennium Seed Bank Partnership (MSBP), is the largest ex situ plant conservation programme in the world. The focus of the programme is plant life faced with the threat of extinction and plants of most use for the future. Seeds collected through the MSBP are conserved in seed banks as an insurance against the risk of extinction in their native habitat. Working with the network of partners across 100 countries and overseas territories, the MSBP have successfully banked approximately 15.6% of the world’s wild plant species. There are currently more than 10,000 Australian native species duplicated at the Millennium Seed Bank as added insurance for the Partnership’s important conservation collections.

We also collaborate with other organisations as part of our work and welcome new collaborations to support the conservation of Australia’s native plant diversity:

Resources available to support flora conservation activities are limited. At the same time we are experiencing greater demands on seedbanks and related expertise in response to the bushfire crisis. We are also working to support other ecological restoration challenges while building awareness, knowledge and capability in our community.

Your support can make a direct contribution to this important work.